From 11th – 15th September 2017, the Centre for Armed Violence Reduction (CAVR) and the Pacific Small Arms Action Group (PSAAG) attended the Third Conference of States Parties to the Arms Trade Treaty (CSP3) in Geneva. The Conference of States Parties is an annual event, bringing together the nations which have ratified the ATT, signatories to the treaty, UN bodies and civil society, including NGOs working to reduce armed violence around the world.

On the third day, CAVR launched its landmark report on the Broader Benefits of the Arms Trade Treaty. This publication aims to reinvigorate the narrative surrounding the ATT, dispelling harmful myths and misinformation. This material is available for free download in English, Spanish and French (see below). It contains the full breadth of advantages offered by the ATT, plus an accessible description of how the Treaty works, all assembled in a single, thoroughly referenced source.

The launch included a panel discussion, and was chaired by Vanessa Wood, Counsellor on Disarmament, Permanent Mission of Australia to the United Nations in Geneva. Speakers included John Quinn, Ambassador and Permanent Representative to the United Nations and to the Conference on Disarmament, Geneva; and Deepayan Basu Ray, Director of Arms Control, Centre for Armed Violence Reduction. 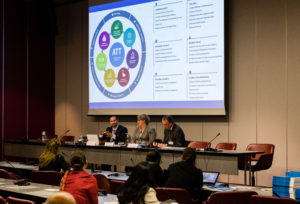 CSP3 was much needed. Since the ATT entered into force in 2014, it has seen historic levels of adoption around the world. Yet, armed violence remains high and many states have yet to meet their obligations under the treaty. CSP3 brought together 106 countries and provided an opportunity for state actors and civil society to discuss how the ATT could better be implemented and how more lives could be saved.

A key theme of CSP3 was the link between the ATT and the Sustainable Development Goals (SDGs), which the Centre has long recognised. The three working groups focussing on Treaty Implementation, Transparency and Reporting, and Treaty Universalisation, will continue to investigate links between the SDGs and the ATT in the coming year.

Ambassador Nobushige Takamizawa of Japan was elected as the President of the Fourth Conference of States Parties, with CSP4 currently scheduled to take place in Japan in August 2018.

We followed this up in New York on October 20, 2017, with the launch of our publication Implementing the Arms Trade Treaty (ATT) and the UN Programme of Action on Small Arms and Light Weapons (UNPoA). The launch included a panel discussion moderated by Hugh Watson, First Secretary of the Australian Mission to the United Nations in Geneva, and it included remarks by four participants: Caitlin Wilson, Deputy Head of the Australian Mission in Geneva; Deepayan Basu Ray, Director of Arms Control for CAVR; Laurent Masmejean, Counsellor at the Swiss Permanent Mission to the United Nations in Geneva; and Philip Alpers, Programme Director for CAVR.

During the panel, Caitlin Wilson highlighted the role of the international community in developing an understanding on how the Arms Trade Treaty can benefit the Sustainable Development Goals (SDGs) and support human security at the national, regional and international level. The event was followed by discussions concerning the practicalities and benefits of developing coordinating mechanisms integrated by not only governmental organisations but non-governmental actors, academics and other stakeholders. Questions included concerns on how to build a comprehensive national action plan able to address the need for effective arms transfer and SALW controls at the regional and national level. The ATT promotes efforts to stop violence; maintain national, regional and global security; combat terrorism; weaken the supply of arms to black markets; reduce drivers of refugee flows; support industry in responsible states; and support the interest of states situated to contribute significantly to implementation.

Free download The Broader Benefits of the Arms Trade Treaty