The UN Programme of Action to Prevent, Combat and Eradicate the Illicit Trade in Small Arms and Light Weapons in All Its Aspects (UNPoA) is a politically binding agreement adopted in 2001 to focus on small arms: cheap, portable firearms which kill more than any other weapon system. The Arms Trade Treaty (ATT) on the other hand is a legally binding treaty which covers all government-to-government weapon exports from pistols and ammunition to aircraft carriers. While the UNPoA encourages effective firearm regulation, marking and tracing of weapons and safe stockpile management, the ATT reduces the risk of cross-border arms transfers. Both these international instruments are interdependent and complementary, working alongside other global agreements to reduce illicit arms flows and to prevent armed violence. 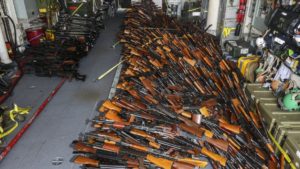 The UNPoA is a useful tool to identify gaps in existing legislation. Our expert staff help officials compare their arms control systems to global norms, then work with them as they guide government through the process of implementation, from capacity building to reporting. As the UNPoA is wide-ranging and involves input from a variety of agencies, the Centre’s gap analysis, workshops and training all take a ‘whole of government’ approach. Our aim is to link actors from different silos in a coordinated effort to detect and prevent the illicit flow and misuse of arms. 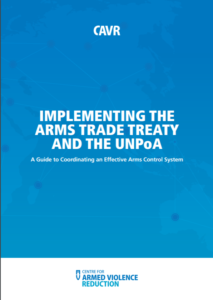 Find out more in Implementing the Arms Trade Treaty and the UNPoA: A Guide to coordinating an effective arms control system.  Inspired by workshops held by CAVR and PSAAG across the Pacific, Caribbean and Southeast Asia, this report focuses on the needs of small island and developing states. It provides technical guidance to localise the effects of arms control instruments and includes inspiration and best practice from similar states.

Find out how CAVR uses the UNPoA