The challenges that Southeast Asian countries face in combating armed violence are unusually diverse. The types of armed violence and the ways in which illicit flows of arms contribute to these differs greatly by country and defies a one-size-fits-all approach. The Centre for Armed Violence Reduction, with significant experience localising international arms control instruments, understands the need for weapon management mechanisms to be locally owned and developed. Particularly in this region, civil society networks can productively support and enhance community responses to armed violence and arms control. 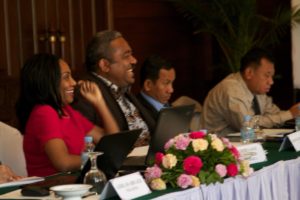 Due to the region’s limited engagement with international arms control mechanisms such as the Arms Trade Treaty (ATT) and the UN small arms Programme of Action (UNPoA), the Centre’s work in Southeast Asia focusses on training and capacity building, allowing governments to better understand and engage with these instruments and to ensure that their own needs are met when participating in related meetings. Sessions run by the Centre encourage discussion of concerns over the implications of such instruments, facilitate collaboration and information sharing, and emphasise the strong links between arms control and sustainable development.

The Centre’s work in Southeast Asia has included a four-day workshop with the governments of eight Asia-Pacific states held in Siem Reap, Cambodia, and in Manila with the Philippines government and the UN Regional Centre for Peace and Disarmament (UNRCPD).