This week at the UN in New York: RevCon3 on the Programme of Action on Small Arms and Light Weapons

Starting today at the United Nations Headquarters in New York, the Third Review Conference will evaluate progress made in the implementation of the Programme of Action to prevent, combat and eradicate the illicit trade in small arms and light weapons in all its aspects and its International Tracing Instrument (ITI). Erly Muñoz, Secretary of the Pacific Small Arms Action Group (PSAAG), and Philip Alpers, Programme Director for the Centre for Armed Violence Reduction (CAVR), are attending as part of the Civil Society representative group.  The ceremony was opened with the election of the President for RevCon3. Ambassador Jean-Claude Brunet of France was appointed as President of the Third Review Conference and all member states welcomed him to his first plenary session.

Throughout the day, Member States have provided their views on how to address the issues of diversion, information exchange and intergovernmental cooperation at the national and regional level. The illicit trade in small arms and light weapons is encouraged by ineffective coordination mechanisms and poor record-keeping systems. The UN Secretary Generals statement highlighted the need for a holistic approach to achieve effective implementation. Maria Luiza Ribeiro Viotti, Chef de Cabinet for the UN Secretary General, stated: ‘Those who kill with small arms could be members of the security forces who abuse power… In some countries more than 60% of killings of women are committed with firearms… regulating small arms is a unique challenge. There are almost 900 million firearms in the world and three quarters of them belong to civilians… For those reasons solutions must be integrating and holistic’.

The representative of Antigua and Barbuda provided a statement on behalf of the Caribbean Community (CARICOM), in which the issue of diversion was highlighted: ‘Mr. President, on behalf of the 14 member states of CARICOM, I must highlight that we are neither manufacturers or importers. However, we have some of the highest murder rates in the world… The use of small arms and light weapons (SALW) in the Caribbean is cause for alarm… furthermore, illegal firearm proliferation is concerning. We must admit that most murders are committed with illegal firearms… although we don’t have an open conflict, the proliferation of weapons is threatening. The illicit trade on SALW and associated ammunitions constitute a huge impediment for peace and security in the region and an obstacle for the achievement of the Sustainable Development Goals’.

The session was followed by a side event hosted by Australia and the Small Arms Survey (SAS) called ‘Global Numbers on Arms Holdings’. The panelists provided information and estimates on global civilian-held firearms numbers. According to SAS, today approximately one billion firearms are counted in the world and of that, 857 million belong to civilians. Furthermore, the United States of America has about 46% of all civilian firearms in the world. ‘Americans Buy 14 million firearms annually… Government lack still revealing information on firearms ownership’  Aaron Karp from the SAS added.

Member States agreed on the importance to including ammunition as part of the UNPoA discussions, since it represents a problem that is part of the illicit transfer of SALW; and synergies with the Arms Trade Treaty. Tomorrow the General Exchange of Views will continue. This session will be followed by a side event organised by the Permanent Mission of France and the UN Mine Action Service titled ‘Building National Capacity in Weapons and Ammunition Management to Sustain Peace and Prevent Conflict’. CAVR and PSAAG will attend the whole event scheduled for the next two weeks until June 29th, when the Report of the Conference will be adopted. 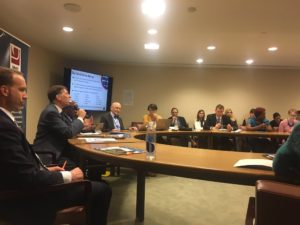 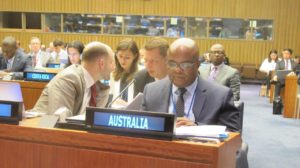 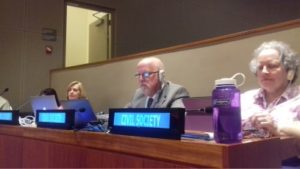